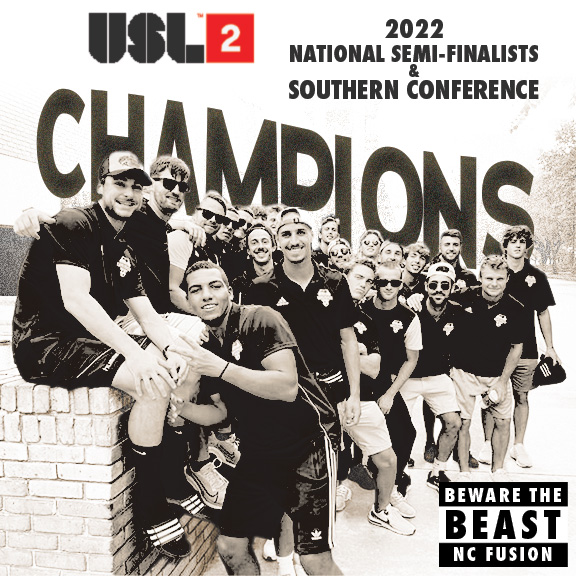 As our USL-2 season has come to an end, let’s recap on our Southern Conference Champions and top 4 team in the nation. Going into the season we knew they would be a powerhouse team after their run in the Open Cup. Before the season started, when I met up with Jamie Davis and asked why he chose NC Fusion he said, “I’ve come to obviously win a national championship, develop as a player, and this is the best place to be.”

The men started off the season hot winning the first home game of the season 2-1 against North Carolina FC U23. Then they received their second win of the season 7-2 against Tobacco Road. After this big win I met with captain Joao Gomiero to see how they were creating such cohesiveness after just a few weeks, “I think it’s just been the first week we’ve been together and it’s just like a learning curve from all of us. Everybody comes from a different place and everybody comes from a different level so it’s just getting those two weeks of training together, understanding what we do well and not do well, going and fixing them, and going into the next game knowing we can do better.”

Heading into their next game against one of the toughest opponents of the season, West Virginia, they pulled through a tough victory of 1-0. They went on to win six more games and tie one game before they faced West Virginia again. This game was a battle and ended in a result of 2-2. Coming to the end of the season our USl-2 men defeated Tobacco Road 5-1 and Wake FC 8-0. With these two wins the team clenched the South Atlantic Division and secured their spot in the playoffs. In the last game of the season, they faced West Virginia one more time leading to the only loss of the season 1-2. The overall record for your USL-2 this season was 11-2-1. They had a nearly perfect season and were pumped going into the playoffs.

In the first game of the playoffs, they would be facing The Villages. After going into halftime 1-1 then losing a man to play the rest of the game with 10, the boys showed grit and drive to keep the game tied and head to PK’s. Joao Gomiero would come through, winning the game with the final PK driven into the upper net stunning the keeper, everyone stormed the field and they would be moving on. Heading into the conference semifinal vs. our neighbors Asheville City they took them down 2-1 and were heading to the Southern Conference Championship against One Knoxville.

With the game underway, it didn’t take long for Mason Duval to put one away. With it tied 1-1 during the second half, they fought through a physical battle and were able to put another one away late in the game to win 2-1. They were once again the Southern Conference Champions. Heading into the national semifinal the storms took over. Delaying the game until the next morning they would be facing the Long Island Rough Riders. Through a tough battle they did end up falling short. Looking back on the season this team won 11 of their 12 conference games, won the South Atlantic Division, became Southern Conference Champions for the second year in a row, and were one of the top 4 teams in the country.

I met with Head Coach Chris Williams to see how he felt about the season and all the success this group of guys created for the program. When asked what he was most proud of he said, “To win a region back to back is pretty special. That is definitely not an easy thing to do or achieve and the fact that the players did that is pretty special. The relationships that they built amongst each other and the togetherness within the group. Our hope is that they fought for something that was a little bit bigger than themselves. That is something Liam and I have always wanted so we are really proud of them for doing that for sacrificing themselves for the team and being selfless, so we are really proud of that and how they represented NC Fusion.”

I also asked Coach Williams what he saw in store for the future of this team, “Our goal as a club was to try and create a nationally recognized program. Our hope is that we’re slowly getting there, and we want to continue those successes. Our hope is that we put the club on a national stage which is obviously exciting for many different reasons. We want to try and promote as many players to the next level as we possibly can, and our hope is that we can continue the success that we have had in the previous three years and build on what we have and bring in great humans and great players.”